Tonight we got a 9 game main slate on DraftKings.  Lots of Stars available tonight.  It’s going to come down to what star is going to give you 70 plus fantasy points tonight.

James Harden ($10,200) – is coming off an average performance for him with 51 fantasy points against the Bucks on DraftKings.  He is projected to get 60 fantasy points tonight.  Expect a high scoring game tonight against the Pelicans.  I think a Rockets – Pelicans stack is a good way to go tonight

Josh Hart ($3600) – is on fire.  He is coming off two consecutive games with over 30 fantasy points. Starting guard Holiday is out.  Expect another big night from Hart.

Domantas Sabonis($7500) – has great matchup with Cleveland.  He is projected to get 41 fantasy points. I expect to reach and exceed that tonight against Cleveland.

Tim Frazier($3000) – is a good pick for tonight.  Reggie Jackson is out and Tim will start.  Expect his minutes to be around 25. He is averaging 0.86 points for each minute played.  My projection for him tonight is 21 fantasy points.

Elfrid Payton($4900) – seems to have won over the starting point guard position for the Knicks.  They are playing Boston and expect him to have a good night. He is the best defender and most skilled point guard for the Knicks.  He is averaging 1.07 fantasy points per minute.

Tonight we got a 3 game slate full of star power.  This is a stars and scrubs type of night on DraftKings.

We got three games on the schedule tonight that are stacked with stars.  This is the first game of the year for Trae Young, Russell Westbrook, Stephen Curry and Giannis Antetokounmpo.  I expect huge numbers from all of them.  Get as many stars as possible into your lineups.

The 2019-20 NBA season really begins today with an eleven game slate.  Lots of star power and lots of value.

We have four games on the slate with Over/Under 220.  I will target those games and few specific players

We have two players with Projected Fantasy Points over 51.2 on DraftKings (Joel Embiid, and Karl-Anthony Towns).  We have a total of 14 players with Projected Fantasy Points over 40.   With it being Day 2 of the NBA season, we really don’t know how a lot of the rookies are going to contribute to their teams.  Safe to go with as many stars as you can get into your lineup tonight.

The 2019-20 NBA season begins today with a two-game slate that is stacked with some of the top DraftKings fantasy producers over the last few years.

Only two games on the slate.  A lot of star power is available on the slate, with the Lakers-Clippers game

Game one features Pelicans-Raptors.  Zion Williamson is out for the Pelicans but they have a bunch of new players along with fantasy stud Jrue Holiday ($7900).  Game 2 features Laker-Clippers with studs Anthony Davis ($10.200), Kawhi Leonard ($9,600) and Lebron James ($9,900).  The over/under is 230 for Pelicans-Raptors and 224 for Lakers-Clippers.  All teams had major changes over the summer. The defending Champs Toronto is intact minus Leonard who is now with the Clippers.

James Harden $11000 on DraftKings.  His salary is lower than the previous games.  With his daily fantasy projection of 63.8.  To me, he his worth every bit of the salary.  It doesn’t matter that he is playing the Warriors on the road.  He is on fire right now.

END_OF_DOCUMENT_TOKEN_TO_BE_REPLACED

His opponent De’Aaron Fox $8200 on DraftKings is also a good choice.  He has scored over 40 DraftKings points in his last 6 games.

TJ McConnell $3600 on DraftKings.  He has a projected plus/minus of 4.21.  He has scored double digit points in his last two games which has related to over 25 DraftKings points. END_OF_DOCUMENT_TOKEN_TO_BE_REPLACED 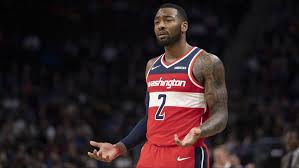 The person who benefits the most is Bradley Beal. He is averaging 53.8 DraftKings points in 5 games. His usage is 31.9%. His average salary during that time is 8160.  Thomas Bryant is your best value play.  He averages 34.05 DraftKings points in only 28.4 minutes per game.  According to the numbers Otto Porter doesn’t benefit from John Wall being off the floor.  His plus/minus is -5.9 with John Wall off the floor.  View the table below to get a glance of the numbers with John Wall off the floor. END_OF_DOCUMENT_TOKEN_TO_BE_REPLACED